I called my father on Tue night. He was asking me, how is your feeling staying in a new house? I answered: Not bad. Feel comfortable and so far so good.
Inside my heart, I wanna thank him for giving advices before renovation, on what to do from Feng Shui point of view. Because he has given advices in a way that to give all of us good health, prosperity, luck, and most importantly, to live in harmony. Well, I just hope things will go smoothly. No point living in a good house but you have no time to enjoy as spending more time to work, or live not healthy and happily, etc.
So far, we quite enjoy staying in our new house. With a Waterway nearby, my hubby, son, and myself had chance to cycle together at night, enjoying the breeze and beautiful nature. I hope I can have this activity regularly. Not only to do some exercise, but also create family bonding, for 3 of us. I think it's important to give a happy childhood to my son as he feels loved and could spend more time with his parents. As he grows up, he will lead on his life. He may find his love one day, build his family, and so on. Time is limited. So while me and hubby can sayang him, we will do so continuously.
Relationship with my in-laws is also so far so good. We maintain respect to each other and promote give and take. Now what's app also make our relationship closer among me and sis-in-law. Planning to have family outing this year, but not yet know where to go and what to do yet.
Feel lucky too to have such an understanding hubby who is good in nature, know what is right and what is wrong, know where the limit is, and he is such a good advisor too, sometimes. Well, thank to SB for meeting us together in present life. Living with contentment is the key. :)
Hope we all can aware of it. Treasure what we have while we can. There is never a perfection in life, so never expect everything to be perfect. :)
Life is short. Do what you wanna do. Love the person you love. Say sorry if you have to.
Have a great life ahead!!!!
Posted by Overcome Life 1 comment: Links to this post
Email ThisBlogThis!Share to TwitterShare to FacebookShare to Pinterest 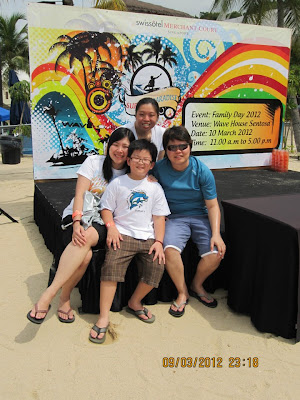 We went to Wavehouse @Sentosa last Saturday. The company where I work organised the Family Day for staffs and its families and friends. Since my hubby was working, I asked two of my best friends to attend and they happened free to join and quite enjoyed it. I brought my son along and he played with my colleague's daughter, whom he knows for 3 years plus but finally could play together and shared same connection. Hahaha.... They enjoyed playing water and baloon inside the shallow pool.

The weather was hot, then it rained heavily. When it stopped, they continued their games. It was a chance for staffs to surf in machine-made waves. If you paid it urself, it would be quite expensive, but we could try it free, but they limited it to 10 persons per session.

One of my best friends tried it and so did my colleague's daughter. Me? Just watching them and walking around. Hehehe....

We were there from 11am and finished at about 5pm. We had our dinner at Vivo before going back home. Once reached home, I took a bath, blowed dry my hair, and had a sleep rightaway at 8pm, woke up the next morning at 8.20am.

Hubby, son, and I went to Compass Point for breakfast @Kopitiam. Hubby left earlier while Reever and I went to Philatelic Museum. He and his classmates just went there last week, but he told me that the time was just too short and he would like to go there again. Since I hadn't been there for ages, I decided to go with him.

We stopped by the fire brigade centre first to see the exhibition inside, then walked further up to the Museum. It's free for children, and adult needs to pay $5. Although the place is small, it was quite fun. Lots of interesting things to see and do.

After half day, we went back home. When rain stopped, Reever, my mother-in-law and I went to petrol kiosk to pump the flat tyres. Reever's bicycle's wheels were flat. We walked quite far and finally found the place. I didn't know how to use the pump. Luckily there was someone helping us to do it hehehe....

We dropped at Sheng Siong buying vegetables and fruits, then went back home preparing food for my aunts who came from Penang and stopped by Singapore for few days. They came around 6 plus with my brother and sis-in-law and had a simple dnner at our house, continued with varies of fruits :)

My brother's daughter spent a night at our house. She played and slept in Reever's room. Reever was quite gentleman enough to let the upper bed for Mei2, and he was sleeping in lower bed. They had quite a hard time to sleep. They took a glass of warm milk before trying to sleep again. They slept at about 11pm.

They woke up quite early. I told them if we wake up early if weather was good, so that we can cycle to the park. But it was drizzling and windy so I asked them to have a cup of Milo and biscuit first for breakfast. After a while, we went down and played at 1st floor. When rain stopped, we visited 2nd level for a while, then to Waterway. But Aryn took scooter instead of bicycle (she doesn't know yet how to ride it), and she was a bit tired pushing it around, so we returned back home.

They had fried rice and cucumber tomato salad after that before taking a bath, and all of us headed to Zoo.... They are playing with water while I am waiting for them. It almost 2 hours by now. Hope they finish soon.

Well, brought around my kid while I can. Give him more attention to his studies. Those are my priorities for this year. No ACCA exam for the first half of the year and still considering for 2nd half.

I feel quite tired actually since I moved house. Seems like my time was spent most for others and not for myself. I really need a break. I also want to relax and enjoy, just like the time I spent in Philippines last year... Enjoying the pool. sea breeze, having food with friends, chit-chatting, drinking and dancing session, and many more. Hope to have another one anytime soon.

Well, stop daydreaming and just hope those kids are back soon!!!
Posted by Overcome Life No comments:
Email ThisBlogThis!Share to TwitterShare to FacebookShare to Pinterest

Wow... time really flies... Our housewarming was held a week ago, on Sunday. We invited mostly family (relatives) and closed friends. The respond was not bad. Only few didn't come due to some reasons. We started from 12pm, but most crowd came at around 2-3pm. We were busy entertaining our friends and families, and a bit 'bu hao yi si' that sometimes we didn't chat enough.. Hope all of you understand :)

All commented that our flat has a nice view, only lack of swimming pool, otherwise it looks more like private condominium, hahahaha.... Master bedroom is quite big enough and toilets are big. Hahahaha.....

We ordered our food from Stamford catering and food is so so ba... I bought additional frozen food and deep-fried it ourselves, scared not enough food. The food was over ordered, as we seldom order from catering, still can keep some for dinner and the next day meal.

Many friends were having hard times in finding the place. Those who took MRT walked to surrounding area first before finding my block due to the confusing block number and inaccessible map details from google. Sorry ah, I thought you all know how to get to my place (doing research first) before came....

Well, thank you for your presence and presents!!! We are glad that you have come to our invitation. We will always welcome you all for next visit and/or lunch/dinner when we can chat more :)

Miss my old pasar food now. Especially the vegetarian. But they are undergoing a renovation in a whole coffee shop. We'll sure go to visit you again once you're ready for business. :)
Posted by Overcome Life No comments:
Email ThisBlogThis!Share to TwitterShare to FacebookShare to Pinterest
Newer Posts Older Posts Home
Subscribe to: Posts (Atom)