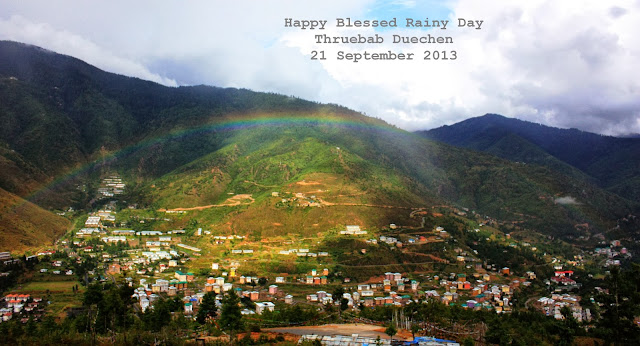 "Blessed Rainy Day is the holiday marking the end of the monsoon season in Bhutan. On this day all natural water resources in the country are considered to be sanctifying and citizens are encouraged to take an outdoor bath to be cleansed of "bad deeds, obstructions and defilements" and accumulated bad karma. Families traditionally gather for a meal of thup (porridge) at breakfast time. The holiday also marks the end of the farming season and the beginning of the harvest season." - source: Wikipedia.org

I heard about Blessed Rainy Day from Gyeltshen last year. He told me that usually on this day, Bhutanese would love to celebrate it by having a picnic with their families and friends. I envied him so much la! I also wanted to have picnic lo! Never expected that this year I had a chance to come to Bhutan, at this particular day, went to Bumthang (during last few days of my stay in Bhutan), and they had already planned for a picnic with so many people!!! Wow!!!Like I said, it's one of my wish lists for things that I wanted to do in Bhutan. It was really my dream was heard and came true!!! Still couldn't believe it!! :)

That morning, instead of waking up at 5am as per suggested, I only woke up at 7am hehe,, I was too tired from the long journey the day before. When I went to the bathroom, there was no raining water collected hahaha.... but I still took a bath in the morning. Hopefully I could still cleanse my past bad deeds and bad karma by doing so :D

I was curious about the area where we stayed. When we arrived the night before, the sky had turned dark and I couldn't see the surrounding well. Therefore, while waiting for the water to be boiled, I walked around the house with my camera.

They were staying very near with Chamkar town. You only had to walk for 5 minutes down the slope. Very convenient, indeed. But I didn't go to town area, only surrounding the house. From their house's window, we could see the view of Lhodrak Kharchhu Monastery (see photo above). From outside their gate, we could find the view of Jakar Dzong (too bad I didn't have a chance to go there as it was closed on both days I were there). Behind their house, I found someone was milking the cow hehehe... I also took photo the house where they stay, a typical Bhutanese house (the one with my photo inside). The two little jarim bumo (pretty little girls) were Suneet and Muna's daughters :)

Once ready, we all departed to the picnic area, called Kurbithang. It's an open air forest surrounded with pine trees. It was beautiful and all greens. When we reached, some families had already reached.

There were many families joining in this picnic. At least 6 families that I knew plus the rest of the people that I didn't really know.

They worked very systematic and divided the job based on gender hehe... Man's task was to prepare bonfire to cook our changba and lunch, cut, cook and clean the meats, etc.

Women would prepare the ingredients for cooking, such as: peeling, cutting, and washing vegetables, etc.

Children were there, of course, only to eat, drink, and play :)

While some ladies preparing the ingredients, the rest started drinking tea with biscuits and zaw (rice cracker fried with butter). They brought two types of tea, Suja (butter tea) and Ngaja (milk tea). Muna sis poured Suja for me. Oh, if I knew they brought two types, I would have chose Ngaja at the first place hahaha.... I was still learning to adapt with the taste of Suja :D

After that, cooking changpa was in progress. They also cooked dhall and some other things. Music was heard from the stereo brought by Yeshey. Kids started the dancing. Boys were busy playing football on the ground. While some girls were playing jumping rope.

At 12 pm, we started to sit together. I thought we were going to have lunch. But I was wrong! Hahaha... We just started to drink Druk 11000, arra, wine, whichever you like, accompanied with 3 types of changpa, chana (bean salsa), spicy beef liver, and chilli chop. Guys would sit one side, women one side, and children at one side. Again, very systematic.


From this time onwards, drinking session had been started. Hahaha... It's their culture ba that they couldn't stand to see the glass not full. Even after drinking a sip of it, they would immediately fill your glass until so full.

Each person had a plate of chana and beef liver. After I finished my portion, they immediately filled my empty plate with another portion. Yallama... I didn't know how much I ate, but I ate until very very very full la... plus the Druk 11000.


In between, the ladies and gentlemen started to dance. They were all very good in dancing, except me. Hahaha... Even Muna sis and Lachhe danced very well!

Kids were continuing playing on their own. Some other time, guys started to play throwing stone, as if they were playing khuru. The whole afternoon until evening time we were doing that non-stop. Eating and drinking free flow.


At around 3.30pm, it started to rain. Despite raining and being wet, they were sitting still and continuing their activities as if nothing happened as they believed that the rain was a blessing from the above. Amazing!! If it's in Singapore, people would start opening their umbrellas or run away to stand under the shelter. Hahaha....

It continued on until evening time. They burned all the rubbish in the bonfire, clear up their belongings, and put them into their cars. We all went back home after that.

But it didn't stop there. Hahaha... Once reached home, they opened another dancing session at the space outside where they stayed. Speakers were put near the house's windows. They reheated the food that was supposed to be our lunch (too full to eat lunch and became our dinner). We had our dinner first, before sitting on the floor mat for another drinking and dancing session.

I was very tired and left them at about 9pm while they were continuing until about 10pm ba. It was such a great experience for me and I was so grateful being able to join their picnic. Oh, I love it so much! There, I learn and experienced many things. Most importantly, everyone was there just to enjoy their lives and be happy! Exactly with what I wanted to have and do in my life. Thank you everyone for your kind invitation and let me enjoyed all that as one of unforgettable moments in Bhutan.
Posted by Overcome Life
Email ThisBlogThis!Share to TwitterShare to FacebookShare to Pinterest