People will never forget how you made them feel - Maya Angelou 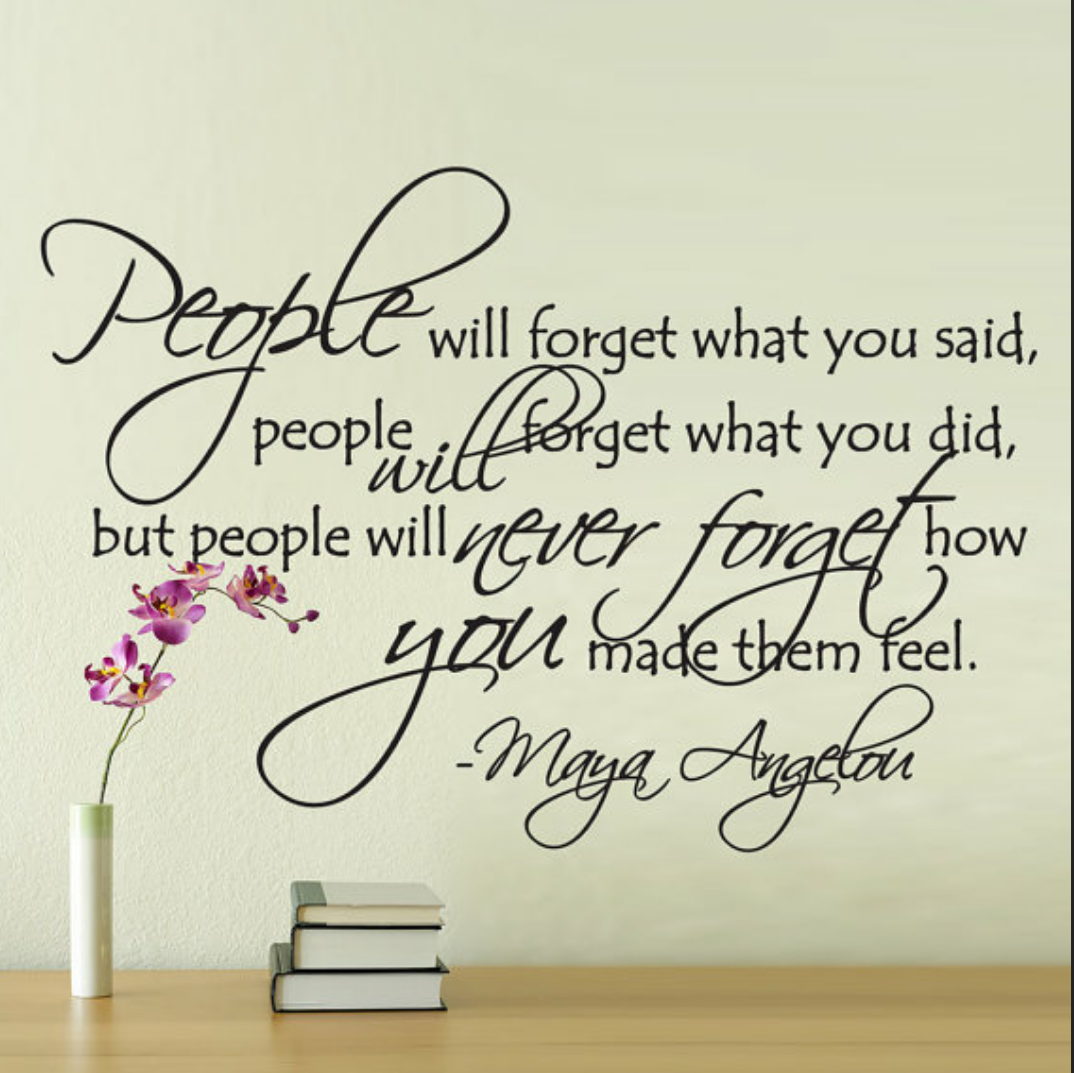 I learned about her departure this morning when my bestie posted her quote in Instagram and wrote RIP next to her name.

At age 86, Maya Angelou published seven autobiographies, three books of essays and several poetry books. But I know her mainly because of her beautiful quotes.

The above quote stays deeply in my mind and I relate it to my hubby's recent experience with Rafa, my sisters' son, during his visit to Melbourne.


In such short period, he had become a favorite Uncle for Rafa, who just turned 5 yesterday. They had spent quality time by playing, reading book, flying kite, drinking hot chocolate, etc. and had a really great time together.

My hubby was called 'Monster Chair' by Rafa since last year when he came to Singapore. It was because when Rafa sat on my hubby's lap, my hubby would play with him as if he was a monster. And Rafa still remembered it clearly until now.

Hubby told me when he was in Melbourne, he showed Rafa a magic by making the rubber Dinosaur disappear from his hand and made it appeared again from his ear. Rafa was very happy and kept asking him to show it to him again and again. Since Rafa was asking him for many many times, he tried to minimize the frequency by telling him that he could only perform the magic to him three times a day.

Therefore, every morning when hubby woke up, Rafa would come to him excitingly and shouted, "Uncle Lemon, show me magic, magic, magic! It's magic time!" Hahaha... He had no choice but to perform magic everyday, three times a day ^^

So when my hubby had to come back to Singapore, Rafa was really sad. My sister said, once we left to airport, Rafa had his breakfast with tears on his eyes. He didn't even cry when his Godmother left. But he did when his Uncle Lemon went back.

Now after coming back to Singapore, my sister often sent Rafa's voice message to hubby through what's app. In one voice message, he said this: "Halo Uncle Lemon this is Rafa... Yes... Oh ya.. I know ya... I know you... Uncle Lemon... Magic time... Magic time... Magic! Magic! Magic!" And other time he said, "Halo Uncle Lemon, this is Rafa. Thank you for the banana (his mom said, 'the t-shirt'), thank you for the banana, for the t-shirt, the yellow one, yes, no, yes,  no (his mom said 'now we look like the banana in pyjama') yes nanana". Ha-ha... Rafa was referring to the yellow t-shirts that my hubby bought for him and his brother.


He was sending a voice message too inviting my hubby to his Birthday party and to bring present for him. But too bad they were just too far away from each other. When hubby replied that he could not attend, Rafa asked his mom "Why Uncle Lemon cannot come to my Birthday party?" with a sad tone.

This evening my sister sent hubby the following message: 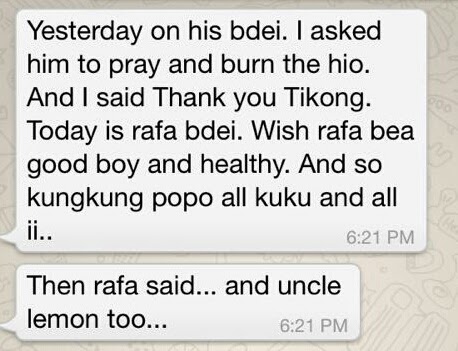 My hubby felt so touched reading it. He told me that he misses Rafa very much too. He wished that he would stay another week there so that he could celebrate his Birthday....


The above were our pictures taken while traveling together and he always sticked by hubby's side in our photos.

When Rafa can read one day, hope he is able to read this blog and hopefully still remember his dearest Monster Chair that ever made his life full of fun, laughter, joy and happiness. We miss you very much too Rafa... Yes? No? Yes? I know you Rafa. You know me?
Posted by Overcome Life
Email ThisBlogThis!Share to TwitterShare to FacebookShare to Pinterest

It seems like one of my mission is achieved - to make my children know and close to their family member. Family is number one in my life. Since we stay alone in Melbourne, far away from Grandparents, all aunties, uncles,plus extended family, a kind hard to make them feel the connection. That's why I pushed myself to bring two children alone with long hour flight to my hometown for this mission. The result is not bad huh.. And thanks to my mom and dajie to make this happened. So Rafa know very well his family in Jakarta, Singapore and Hong Kong. He able to feel love and care from his family...
With Raymond, as I said before, he is a humble person that open his eyes, open his hear and share with joy and laughter. Not only Rafa who feel his love but also Ka ming in Hong kong. He able to put his position as uncle and as friends too.
For the magic,... you teach him how to mess my house.. Fake magic, he throw everything behind him in the name of magic. Ask his mami for his magic show. Mami has to close her eyes many times during facetime, so he can hiding and disappear or throw the dinosaurs everywhere to make it disappear! please do the real magic...! :)
We waiting for all of you to come back and visit us again!
Yz

Thank you yz for your comment :) Btw your house had already in mess before we came. Don't blame my hubby la.... :P

Such a lovely story about Uncle lemon and the "the little photo bomb" as per your IG pics lol.

Rafa will be 9 years old in 3 days. I asked him to read your blog. Rafa comment: is it a blog? Ooh so this is a blog.. Tell ii Mq I want uncle lemon to do magic.. yz n Rafa