Recently I have this headache when I was working. Perhaps nothing much to do, and I ended up watching the computer monitor for almost a whole day and that's why this headache came =(((
Hope it's not something that bad.. *hopefully..
Always feel wanna take a rest once a week especially in the middle of the week
*sigh...
Well.. still 40 mins to go.. let me endure the rest of the day... =(
Posted by Overcome Life No comments:
Email ThisBlogThis!Share to TwitterShare to FacebookShare to Pinterest

24 hours a day seems like never be enough.. now i know that kind of feeling...
Well.. now i'm taking 2 paper and plan to take two exams this June. Dunno whether I am prepared for it or not.. 'Cos the papers that I take combine both calculation and theory.. I hate theory.. =(((
Now only left 3 months before the exam. And every week I have to attend two classes each week, which is on Tuesday and Thursday, then there is workshop this upcoming Saturday and next Saturday (each from 2 to 6pm), and worst, I have to go to the dentist appointment, which needs few days to attend =(
Some Saturday and Sunday I have to come for the make up classes.. then there is my friend's daughter one-month celebration in one of the Sunday.. and to meet my friend who will come from Jakarta.. and many more.. And most importantly.. i have not enough time to play with my son.. =(((
Everytime I want to take leave, that's always on my mind.. But I want to save my leave for my long holiday.. =((( so.. endure and see how far can I go.. =P
Well.. just hope that there is always enough time for me to do this all and life won't be that stressfull to me...
Posted by Overcome Life No comments:
Email ThisBlogThis!Share to TwitterShare to FacebookShare to Pinterest

Yesterday the result came out for the last exam I took.. Fear.. deg deg deg.. but then.. I pass. The funny thing is that.. the results for my last three exams were all the same.. And I think the number came out at the 4D result last time.. hahahha.. too bad, i didnt buy.. or else I might win it.. hehehe..
The friend of mine has finally passed her paper too.. with a mark in border line.. 50 (five zero). I'm happy for her..
And another friend has finally finished all of his paper.. He's really good... And now he's working in a trading company earning lots of bucks..
For me.. it's still a long way to go.. sometimes I want to finish it faster.. but too bad.. I don't think I could cope with it.. Now, I just need to try...
Posted by Overcome Life No comments:
Email ThisBlogThis!Share to TwitterShare to FacebookShare to Pinterest

I am unwritten, can't read my mind, I'm undefined
I'm just beginning, the pen's in my hand, ending unplanned

Reaching for something in the distance
So close you can almost taste it
Release your inner visions
Feel the rain on your skin
No one else can feel it for you
Only you can let it inNo one else, no one else
Can speak the words on your lips
Drench yourself in words unspoken
Live your life with arms wide open
Today is where your book begins
The rest is still unwritten

I break tradition, sometimes my tries, are outside the lines
We've been conditioned to not make mistakes, but I can't livethat way

Reaching for something in the distance
So close you can almost taste it
Release your inhibitions
Feel the rain on your skin
No one else can feel it for you
Only you can let it in
No one else, no one else
Can speak the words on your lips
Drench yourself in words unspoken
Live your life with arms wide open
Today is where your book begins 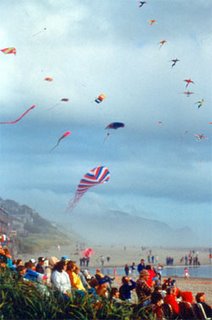 Note: Photo taken from http://seattle.about.com/library/gallery/blphotoORlincoln3.htm reprinted with permission of the Lincoln City Visitor & Convention Bureau
Posted by Overcome Life No comments:
Email ThisBlogThis!Share to TwitterShare to FacebookShare to Pinterest

What would you feel when u started losing someone u love?
No matter fast or slow, it will be gone one day
Some people want it slow, but some want it fast move
In the end both will go the same way

For me personally, I will be happy when someone I love is happy with his/her life
Doesn't mean that he/she must live together with me
Just to know that they are happy and continuing their life made me happy too (*liar.. hahahaha..) hm.. hm.. aiyah.. not really lah..
Imagine if I love 100 people, does that mean I have to live with 100 of them?? Non sense, rite?
=P

Well.. cannot be sad.. must cheer up.. and carry on with life
So many things to do..
Life is not always be miserable.. but to have fun too
Losing people you love is something that everyone will always face, me for example.. hahaha..
Clubbing once in a while.. Gathering with friends.. And most important thing.. to be too healthy is not a good idea.. hahaha... 'cos I will be left behind when I 'm old one day.. so.. since I'm not a full time smoker, I can have my liquor to make my life happier then... =))

Yeah.. just pile up my stock of Vodka
I have Original, Vanilla, Peach, Kurrant, Citron, and Raspberry, left the Orange one.
Dunno how many bottles have I finished previously. Still remember my favourite Malibu..
If I collect them, perhaps there were about my toilet size.. hahahaha...

There are many invitations this month.. Perhaps I need to join the crowd and donate some of my collection to the party.. haiheihiaheihaiehiae.... well.. perhaps... ;P
Posted by Overcome Life No comments:
Email ThisBlogThis!Share to TwitterShare to FacebookShare to Pinterest