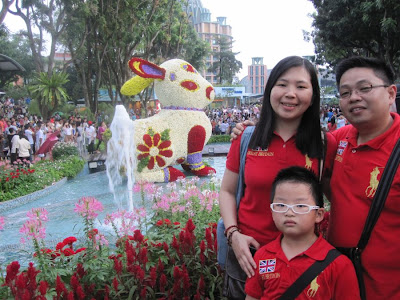 It's 8th day of Lunar New Year!!! Huat ahh!!! Happy Rabbit Year!!!
Gong Xi Xin Nian Kuai Le!!! Kiong Hee Fatt Choy!!! Happy Prosperous Chinese New Year!!!
It's rabbit year. Hopefully we survive this year gracefully. It isn't said to be bad, and isn't said to be good either. It depends :) Well, some people would have a good year and some wouldn't, while some would have an average year. There is always good and bad, isn't it?

This year my parents and sis came here. We had a great duan yuan fan, where my parents cooked delicious meal for us, using their cooking skills practiced over years. Hehehee.... We just helped up eating and washing the plates at the end of the meal. Hahahaha.... 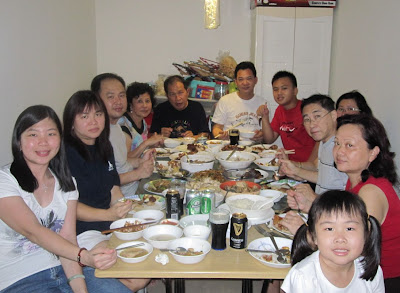 First round Duan Yuan Fan @Bro's house with parents' home cook dishes
I had second round of duan yuan fan, a sumptuous steamboat meal at home sweet home, prepared by my mother-in-law (mainly). Without her around, we might end up stocking our house with nothing. She did the marketing for all the ingredients. Thanks mother! 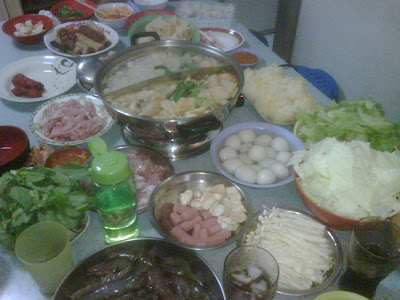 Second round of Duan Yuan Fan - Steamboat @ Home Sweet Home
On New Year itself, I went to three houses. First is my hunny's cousin house. His father's families gathered there annualy. It was crowded. I was served with vegetarian food. Thanks to the caring cousin who catered to my need (me and Reever, also families were being vegetarian on 1st day). So his cousin asked his mom to prepare vegetarian food especially for me as the rest were eating as per normal.

After that we went to my hubby's grandma house. We also go there every year when we are here. I was quite hungry in late afternoon and snacking myself with tidbits that Ama prepared (she always has kwa zi, peanuts, and cashew nuts as tidbits). My hubby's uncle entertained me with 2 cans of beers. Oh ya, I had 2 cans as well before that at his cousin house. Hahahaha.... 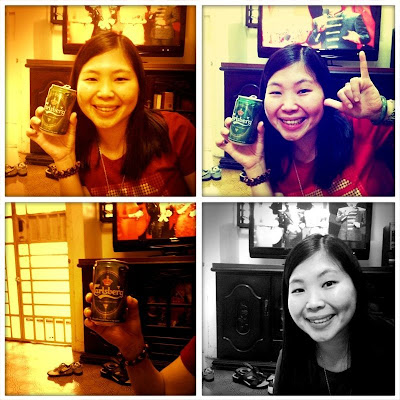 It's Carlsberg time!!!
Last house to visit was my brother's house where I had my vegetarian tang hoon noodle cooked by Mom and Dad. Nyummy.. It warmed up my stomach hehehe...

My bro and families went to MBS. I didn't join them. I accompanied them on 2nd and 3rd day of CNY. We went to Sentosa for both day. 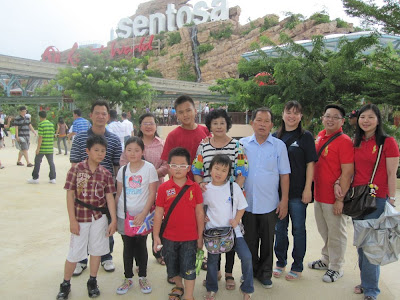 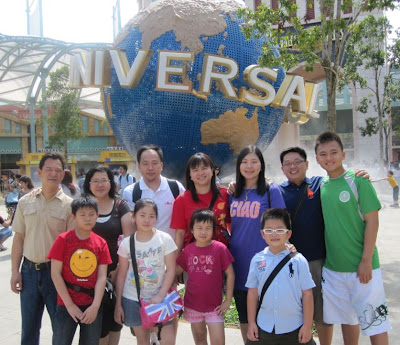 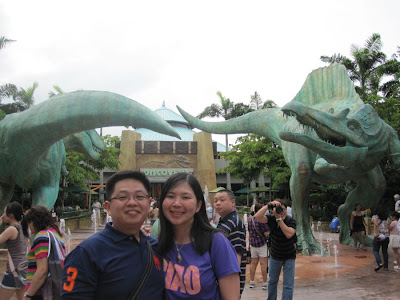 Me and lovely hubby (his first encounter of USS) @Jurassic Park area
I had quite lots of first time there. First time riding skyride in the rain, first riding luge in the rain (luckily the rain became smaller), first time riding on two wheel Segway (I was moving and bumping when om training as I didn't get used to it. Hahahaha...). In USS, I also experienced first time riding on Galactica Human (sitting on first row - wow! You could see clearly whatever thing in front of you!! It's rock!!), and Cyclon (they really turned you up and down, left and right, 'til you wished that it would end soon.. Hahahhaa..., first time watching interactive donkey show, first time watching Waterworld show in Singapore (I watched once in LA), first time taking the Canopy Flyer in Jurassic Park area (my hubby was sitting beside me, holding my hand tightly, and kept chanting Amituofo... Amituofo... until we reached back to the platform. Hahaha...), first time sitting on Treasure Hunt car (stirred by my son), and many more. 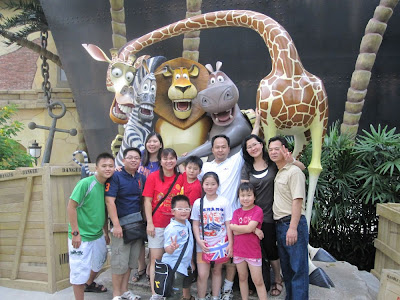 Posed together with Madagascar
It's great! Sometimes you just wanna out of the usual thing, trying something new, and re-alive! Hehehee...

Last Sunday we invited whole families to have steamboat at our house. We really had great food and time. We also had lao he together. Good time passed very fast. My parents and sis and families have returned back to their home on Monday.

Unfortunately good things didn't happen to everyone. On 2nd day, my 3rd sis who lives in Melbourne, reported that there was hail storms and continuously raining at their house. The ceiling in living room, dining room and kitchen area had come down. It scared them very much. The electricity was cut for a while. Luckily they were all fine. There were Indonesian living nearby their house coming over and offered help to them. Lucky that they could help them on time. My sis was hurriedly packing her valuable stuffs and they slept in her neighbor house for a night or two and returned back to their house with no ceiling when the things had been cleared. Now they are worrying of the upcoming rains and afraid that they won't be able to claim for the damage from the insurance. We can just keep praying and hope that it can be claimed.
There were few unlucky incidents happening to her. Hope she is able to get over it and keeps moving on with positive thinking. Jia you Sis!!! There is a rainbow after the rain!!!

Well, I'm counting down for my next trip. Hope everything goes on smoothly. Hope me and my friend would have a safe and enjoyable trip soon. Wish us luck!!