These past one month, I met with current and some old friends...

Starting from current and ex-colleagues - having early crab dinner at AMK in mid July and continued with Karaoke session at Kbox.

On 24th July, my ex-school friend, Yenny, came from Jakarta for training. We hadn't met each other for at least 16 years..., since we graduated from senior high school. She has a pair of twins and working in OCBC Bank in Jakarta. In the middle, Aileen, is also my senior high school friend, but we keep in touch all the way until now.

On 27th July, I met up with old time friends. It's a long story and I won't tell the story here... Used to be my hubby and his NS' buddies who brought us to meet up for dinner - usually after their re-service. There were 6 couples. Some was married couple and some was girlfriend/boyfriend relationship. The boys were buddy buddy since they did most of their re-service together.. and slowly one by one got married and had kid. Until one day, the boys relationship got separated due to some reasons. Few of them kept in touch, until now only left one guy that is quite closed with my hubby. And one by one got divorce as well.. From six couple, now only two couple still maintain the marriage, one is in the process of divorce, and another girl had re-married last year. I still keep in touch with one of the girl and she still keeps in touch with few of them and one day she had the idea for us to meet together. One couldn't make it while we didn't ask the other one as we were not that close with her, so there were 4 of us.

We met up at KTV pub and it brought back our memories to the past. They like to play pool, sing karaoke, while I like to sit still and sip my beer... Hehehehe.... Fate is quite funny sometimes... But we accept what it is and it's good to meet up again.. after sometime....

Last Friday, my friend arranged to meet up with other ex-colleagues. Since I had nothing, so I decided to join just to keep in touch.. Managed to get these people below, while some chose not to join...

There was another guy, but he left before we took picture. We all now work in different companies. Some has upgraded their post, while some post remains the same, but of course with different pay.

Tonight, hubby and I just met one of his NS buddy. He was quite close to us as hubby had same thinking as him and can click together. He had gone through hard time for the past 1-2 years and finally he managed to get back again with a much better life. He mentioned this words: 'Sian Yu Bian Cheng Bao Yu:, which means.. salted fish has become abalone. This is how he described his life. A big change. And he is happy with his life now. Luck has turned his life to the better. We are really happy for him and hope he can maintain and gone through anything that lies ahead in life.

Hubby also told me that he met his buddy this afternoon. He's also happy to see him to change to reach what he's dreamed for. This buddy also mentioned of repay the kindness of people who ever helped him when he was down before. Very hard to find this type of people nowadays.

One by one, my hubby's friend has become successful. Finding their way to earn a better earning. Well, I'm still hoping that one day my hubby will lead into that way 'cos somehow I believe that he will be success too one day.. only that on later  years of his life. I don't know what he's going to do.. but I believe one day he can be there, as long as he believes.

Now, seems like people that close to him has succeed one by one. For us, we still maintain our lives in the middle and still happy with it. Because happiness can't be measured by how much money you have. It appears when we know how to be content with what we have. This is what people often forget although they have already had what they want.

I got this quote from a friend.. Just for sharing... 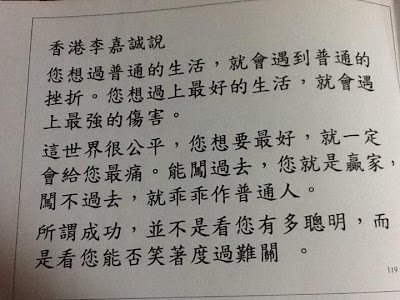 That's why success, is not because you are the most clever people, but is for those people who can still smile and laugh when having difficulty.

So, are you the winner? Or are you a normal people like me??? :)
Posted by Overcome Life 1 comment:
Email ThisBlogThis!Share to TwitterShare to FacebookShare to Pinterest
Newer Posts Older Posts Home
Subscribe to: Posts (Atom)