Sonam told me Anuradhapura was the must visit place if I was interested to visit the pilgrimage sites although he himself had never gone there before. So since it was our first visit, we both relied a lot on Google map while planning which places to go, which one to visit first, how to go there; checked on Google regarding the information of each place; asked local about how far the distance from one place to another, which transport to take, how much roughly it would cost, etc.


On my 6th day in Sri Lanka (11th April 2018) after having breakfast, Sonam and I started our journey from Ragama Junction railway station. The train delayed for 20 minutes. It departed only at 9.35 am. It took us 5 hours to reach Anuradhapura and we only managed getting the seat 2 hours after we boarded.

Once reaching Anuradhapura railway station Sonam bargained with the tuk tuk driver asking for local price to reach Mihintale - our first destination. Fyi, the tuk tuk driver there would usually ask much higher fare (up to double fare) for tourists.

Mihintale was believed by Sri Lankan to be the place where a Buddhist monk - Mahinda (son of Emperor Ashoka of India) - met up with King Devanampiyatissa, which inaugurated the presence of Buddhism (the birth of Buddhism) in Sri Lanka. It was located 13 km east of Anuradhapura. It took about half an hour by tuk tuk to reach from Anuradhapura railway station. The driver dropped us at the entrance and we continued our visit on foot.

First, we visited Kanthaka Dagoba or Kanthaka Cetiya - a circular stupa with four frontispiece decorated with sculptures of dwarfs, animals, human, divine figures and floral motives. Each frontispiece had different animals on top of the square pillars - the elephant on the east, the lion on the north, the horse on the west, and the bull on the south (Source: wikipedia.org). It was located on the right side from the main entrance. We had to go up through staircases to reach the place. 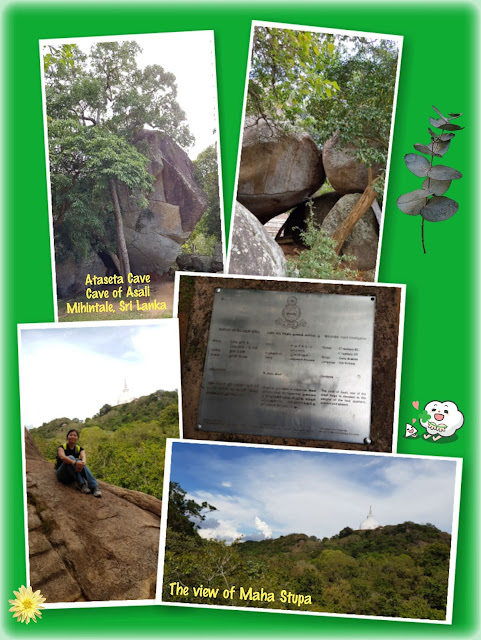 From there we moved on to Ataseta Cave - the cave of Vasali - by passing through big rocks. You could sit on the rock there to get some fresh air, overlooking the beautiful view of Maha Stupa.


Next, after passing by the car park, on your right you could have a look at the Singha Pokuna - lion standing with two legs' pond. It was the place to collect water supplied from Naga Pokuna through the tunnel for the use of bhikkhus (monks) - which could also be found on the way up towards the Alms Hall - figures of snakes with the hoods spread out in the background.


The above picture was the Alms Hall or refectory - the place where daily alms were provided for bhikkhus who resided in the Chetiya Pabbata Vihara.


Next to it you could find the Mihintale stone inscriptions - two large slabs of granite contained rules and regulations related to administrative purposes of the monastery.

Kept walking and you would be directed towards ticket counter. Foreigners had to pay LKR500 while it was free of charge for local resident. After that you would be directed to a place where you could store your shoes safely guarded by a staff. Lucky for us that the weather was not hot (it was rather cooling and dry), or otherwise our barefoot would be so painful stepping on the hot sands, little stones, and big rocks.


Ambasthala Dagaba was said to be built by King Makalantissa. The ruins showed that there had been house built encircling the stupa. The Dagaba itself contained the relics of the great Apostle Mahinda. It was in this place where King Devanampiyatissa first met the Arahat Mahinda. (Source: wikipedia.org)


We had to hike to a giant stone to reach the above Buddha statue. As I said previously, we were very lucky that the weather was not hot, because otherwise we were not able to climb through the hot stone.


The view from this place was amazing!!! Worth the hike :) I did not expect that the place could offer such an amazing and peaceful view. Loved it so much!


Next was to climb another huge rock to the top of Aradhana Gala. History said that Mahinda came to Sri Lanka by travelling through air and this was the place where he landed. (Source: wikipedia.org) It was windy and it offered another beautiful view up there :)


And finally to the top where Maha Stupa was located. It was built by King Mahadathika Mahanaga and restored afterwards.


We encircled the stupa one round and halfway found the above - Mihindu Seya Stupa.


From there we could see the view of Anuradhapura and the surrounding areas.


With that we had covered most places in Mihintale. We walked back to where we came from, took tuk tuk and visited more pilgrimage sites in Anuradhapura. Overall, it was a great place to visit and worth visiting. So, stay tune for more upcoming posts!! :)
Posted by Overcome Life
Email ThisBlogThis!Share to TwitterShare to FacebookShare to Pinterest