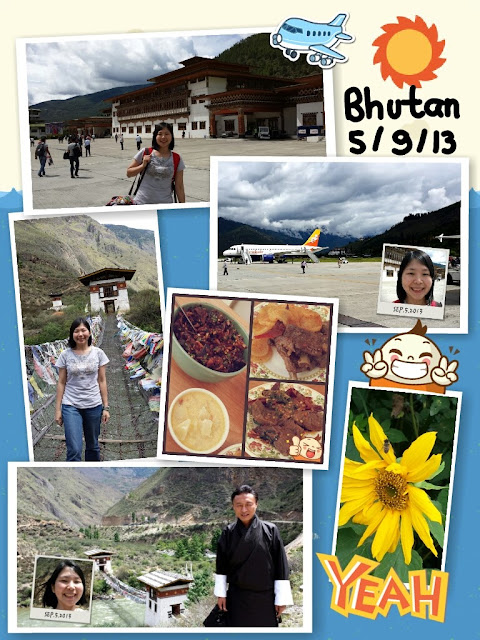 Finally I am in Bhutan!!! Oh it seems to me that I am dreaming. Until I had to ask my friend, Tashi, to pinch my hand hard to ensure that I wasn't dreaming ha ha...

It was a morning flight. It flew at 6.30 am from Singapore and it reached Kolkata after almost 4 hours, stopped for half an hour, and flew another 55 mins to Paro.

Tashi went to airport and picked me up. He came alone. There supposed another person coming but she couldn't make it as she had to prepare her upcoming exam. So it was just two of us.

On the way to Thimphu we stopped at the steel bridge which was very old. Actually I just wanted to see and take photo but Tashi told me that we could walk on the bridge. So we gave it a try. It was so scary. Hahaha... I know steel was a very strong material. But after few hundred years, the quality may changed no? The one that made us scared was not the steel bridge with lots of holes, but the view of fast stream river right below the bridge.  Haha...

However we managed to go through it and went through the wooden bridge when returned :D

Tashi stopped at the road side to buy an apple. It's an apple season now in Bhutan. It was sweet and crunchy. Oh I felt so blessed 'cos I finally managed to eat Apple growing here in Bhutan :)

We had lunch straight away once we reached Thimphu. We ate Bhutanese food - spicy pork and beef with lots of ezay. Oh the ezay tasted so wonderful! It wasn't that spicy but very tasty :)

After lunch we would like to go to the place where I stay. On the way up there we passed by the Memorial Chorten, the most visible religion landmark in Bhutan. There seemed to celebrate something. Many people were there. We decided to stop. We went in, circumambulated the stupa three rounds, then went inside to see how it looked like. We went up too. There were monks chanting and playing the religious instruments. After that we turned the big praying wheels which were located at the side.

After that we visited Changangkha Lhakhang, which was built in 12th century, the oldest temple in Thimphu. Many baby born in Thimphu would be brought to this temple to get the bless from the monk and also to get a name.

I wanted to go there since I would like to ask what Bhutanese name should I have. We went inside. Many monks were chanting and playing religious musical instruments. There was one monk in the middle in charge pouring the water for the bless, people to ask their request by throwing the dice - the number would determined if it's good or bad, and also to choose a name.

For Chinese, choosing one's name would need few thing, such as: date and time of the birth. Only after that the person would calculate the number of stroke of the Chinese name that is suitable for that person's fate in life.

But here, I don't know if it's only for me, as an adult, not a new born baby, the monk took a plastic container filled with many folded paper, mixed the container, opened it, and took one paper out. Here they go, my Bhutanese name would be Sonam Lhamo. It's fixed in pair. My friend told me the meaning was "Goddess of Fortune". Wow!! I was afraid if the name was too good for me. Hehe...

After that I found out from another friend that I must have gone to Changangkha Lhakhang to get my name because every female's name would be started with 'Sonam' and every male's name would be started with 'Tandin'. Ah, now I know... The name wasn't come in pair, but only 1 word behind to be put after fixation of 'Sonam', and they did that according to the Deities of the temple. Thank you for giving me such a beautiful name with beautiful meaning :)

Once done we went to the place where I stayed. It was in Mothithang, located in quite high place. Additionally, the place that I stayed was also in very high level, 5 th floor with no lift. Hahaha... Luckily Tashi was around. He was having a hard time bringing my luggage up. Eventually we managed reaching there. The place was good, clean and comfortable. There was veranda connecting to both of the rooms. The veranda faces Sangaygang. Such a beautiful view! My friend was so lucky able to get this place with a fantastic view :)

Once settled, we went to BNB (Bhutan National Bank) at town to change money, then to post office to buy post cards and stamps. After that I visited my friend's working place and met up with another friend who invited me to Bhutan, stayed there for a while then I went back home and took a rest.

At 8pm, Karma fetched me and we had dinner at Bhutan Kitchen. I met up with my friend who was our driver last year when I came to Bhutan for traveling. He has become happier now and later I found out that he had gotten married earlier this year. Oh, I was happy for him. Hope this time everything was going smoothly :)

I went back after dinner and took a rest. It was a long day with so many activities for me. I had so much great time and felt very grateful for my friends who spent their time and effort to accompany me almost whole day. So, that's all for day 1 :)
Posted by Overcome Life
Email ThisBlogThis!Share to TwitterShare to FacebookShare to Pinterest

NIce to know that you are having wonderful time little country...

Haha... Thank you Sangay for your well wishes!! I'm indeed enjoying my stay here in Bhutan :)

HI there, I have been reading you blog and it's a great read. I think you are a cool and cheerful person and a happy traveller :)

I am a 25yr old freelance photographer travelling alone through bhutan from the 12th of september. It would be great to have some company or simple meet up at some point.

I love photography, exploring, trying new things and am pretty adventurous.
You can see some of my photography here:
www.flickr.com/ajsharma

Please let me know if you'd like to plan to meet up somewhere. You can reach me at ajsharma22[at]gmail[dot]com

Hi AJ, thank you for reading my blog and your compliment and I'm so sorry for not replying you early as my trip in Bhutan was quite hectic and I wasn't in Thimphu when you reached there on 12th Sep.

I saw your photos in the web you gave and it was wonderful. I hope you had a great time in Bhutan and produced many more wonderful photos there.

I enjoy your blog :))
Had wanted to visit Bhutan for the longest time.
But friends always wanted to go somewhere else ...lol...
Thinking of going solo, you think it's OK ? Traveling alone there?

Hi Eva. Glad that you enjoyed reading it :) According to their policy, tourist has to go there through the travel agent and pay USD 200 (off peak) or USD 250 (peak season) per day, but it's inclusive of your hotel, meals, sightseeing, transport and guide. And if you travel with less than 2 person, there will be additional charge. You can check with Druk Asia staff regarding it :) It sounds expensive but since it's all inclusive, the experience that you'll get is priceless ^^ All the best! :)