Married to Bhutan by Linda Leaming 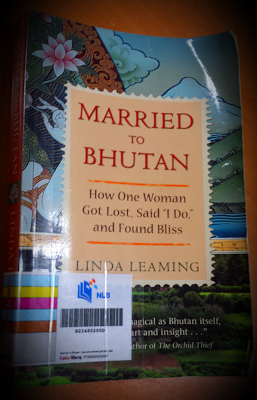 I saw this title in Passu’s blog many months back and once I read the blog, I found out that it was a title of the book written by American lady who got married with Bhutanese man.

I managed to find this book in Bishan’s library last week. I was so exciting, immediately took it out of the shelf, scanned the barcode, and brought it home. I couldn’t wait to read it and was wondering what it was all about.

I went to Bhutan once, in August last year but it feels like it has just happened last month. Wow! Time flies… We were staying in Thimphu for two nights at Hotel Druk, and only later on I found out that the Clock Tower Square was the one of the gathering places for Bhutanese.

During our tour there, we went to several places. As I watched the journey from the bus’s window, the bus took us to almost the same area over and over again, at different timing. I loved to capture the buildings, places and surrounding’s figures into my brain as much as I could since I love the country very much. Oh, how I wish I could go back there again anytime soon…

So, as I read through the book, I recalled back all the memories that I had from Bhutan, especially when she described Kawajangsa. I also tried to connect it with experiences I had during my Kolkata trip, while having dinner with a group Bhutanese students who were studying there when she described her experienced when she visited her prospective mother-in-law’s house for the first time.

“Our conversation was stilted; then he disappeared. He came back after a few minutes with another cup of tea and some biscuits and once again evaporated. To American this is very strange behavior, but any Bhutanese would do the same thing. Bhutanese must give the visitor the best, most comfortable place in the house to sit, and then they must feed the guest the best food they have. Conversation is optional – food is not.“

“After an hour or so, Namgay appeared again with an enormous bowl of red rice and some phak sha pha, or dried, aged pork fat, considered a delicacy in Bhutan. He sat the food in front of me on the floor, smiled, and then left the room again. I waited for several minutes to see if he would return with food for himself. It is typical for guests to eat alone in a traditional Bhutanese household.”

I experienced almost the same thing, especially the part where the Bhutanese must give the visitor the best, the most comfortable place in the house to visit, and feed the guest the best food they have. Wow, I was pampered!!! (That was how I managed to taste Raven vodka in Kolkata!!! :) Hehe…) 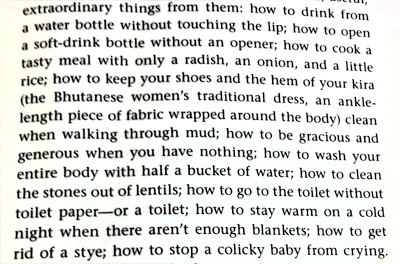 I took out from the book the sentences above. I would like to learn some of the skills too such as how to cook tasty meal with only a radish, an onion, and a little rice; how to keep your shoes and kira clean when walking through mud; and especially this one: “How to wash your entire body with half a bucket of water.” There must be a special skill to do that! Anyone can teach me??? Hehehe…

And I also found the quote below to be something that fat woman like me would love to hear: 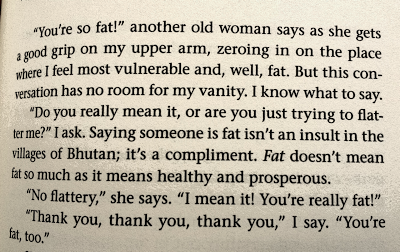 Hahaha… Yea, my Bhutanese friend once told me too that fat represents healthy and prosperous there. And how wonderful it is to tell someone fat and it still makes his/her day :)

Bhutanese believes that “the more distance and difficulty, the more karmic points you accrue.” It reminds me when Gyeltshen, our driver – now friend, told us to walk up to Taktsang Monastery instead of riding horse. Hehehe…. I never heard that before la…

Overall, I enjoyed reading the book. There were many other points I didn’t mention here, but it has definitely equipped me to become a better guest if next time I have a chance to visit Bhutan again. I have never visited Bhutanese house before, so I hope my curiosity and my chatter character will not startle the owner of the house. Hahaha…

I am Bhutanese and was having nice time to read this article.

Thank you Jigme for reading and enjoying my post. You even follow my blog. I appreciate it very much :) Have a great time out there!!! :)

I was reading some of your posts and it really prolonged me till the rooster of Bangalore morning crocked and i love reading it, even the book i read never engaged me since. wonderful job Ms. Rima. I remembered reading the books of Author Dan Brown where i spent till morning to finish his novel(in his all books i did the same) after completing his books now i found yours as good as his..... Thank you.

Yes Bhutan carries unique cultures, culture that is not in the other part of zones. we, Bhutanese had no history of civilization like of others but till have the unique cultures,unique from Indus, Egyptian, and Mesopotamian civilization. Other than the mentioned styles and practices of Bhutanese one can even teach you better than what you think as better for you, what is interesting and love for you, not a praise for my people but appreciation on their ethnicity being preserved for our generation.....love more to learn naturally karma will guide you to the way of perfection.... Takcare Ms. Rima.. whatsoever i enjoyed your posts.....

Name same kadinchela Sangay for your comments :) It's great to hear that you enjoyed reading my blog posts la!

Indeed Bhutan has a unique culture and I've learnt even much more this time. Will share it once I return with more blog posts. Keep reading la! Take care! :)