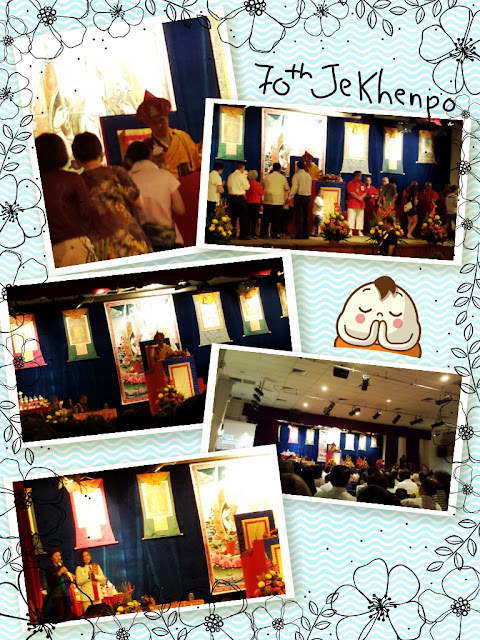 Yesterday I happened seeing my Bhutanese friend’s posting on his Facebook that there would be Chenrezig Empowerment brought by 70th Je Khenpo Trulku Jigme Chhoeda at Ngee Ann Auditorium, Teochew Building, starting from 7.30pm. He came together with His Eminence Trizin Tsering Rinpoche and other monks from Bhutan.

Je Khenpo is the Chief Abbot of the Central Monastic Body of Bhutan. I read from Wikipedia.org that the 70th Je Khenpo, is believed to be the reincarnation of Maitreya, as well as the Mahasiddha Saraha, Hungchen Kara, Kheuchung Lotsawa, and Pema Tsering.

Since I had no plan to go anywhere after work, I called and asked my colleague if she was interested to attend it too. I told her, it would be my first time attending this. I also told her, to be honest, I had no idea who he was and why we should go there. But since he is a Chief Abbot from Bhutan, it must be not easy for us to meet him in this life unless we really had a good fate and good karma. Also, since he was going to bless us with Chenrezig (Avalokitesvara or Goddess of Compassion)’s empowerment, it must be a good thing in life too right? So, there was no reason on why we shouldn’t go. Well, maybe there was.. It was either haze or heavy rain. But we both were really fated to go there. The weather was good and the sunset was beautiful.  After worked, we had a quick dinner and we both strolled to the destination, which was not very far from our working place. 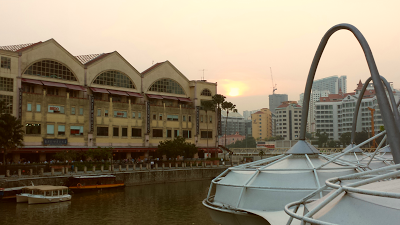 Again, good karma! We were very lucky being able to get seats inside the hall (mainly for invitation guests), although it was at the last row and most left side. But it was fine for us. Je Khenpo started it with prayers. Then we listened to the Dharma teaching about happiness, samsara, and how to get out of it. He also talked about the Chenrezig Empowerment. After that he said prayers on Chenrezig Empowerment and we started to line up to get the blessing from him.

In the same line, after getting the blessing from 70th Je Khenpo, we were offered water from bumpa into our hands (to drink and spread the rest on our head from front to the back), we were also given pills which they said good for our body, then they gave us yellow or red string and cards, books, relating to them.

It was such a great experience to both of us. We could feel the blessing already since both of us managed to get seats inside MRT side by side when we boarded. Hehe… Well, it was such a good fate for us able to attend and meet up with them. Thank you, thank you, and thank you for everything. May all sentient beings be happy. Sadhu Sadhu Sadhu.
Posted by Overcome Life
Email ThisBlogThis!Share to TwitterShare to FacebookShare to Pinterest

Hi thanks for sharing such a good information. His Holiness the 70th Jekhenpo Truelku Jigmed Choeda is coming to Malaysia tomorrow for Buddhist Chenrezig Empowerment and Blessing Ceremony. I had invited more than 15 people to join this event.

Hi Carrie, it's my pleasure to share it here with all of you and I'm glad that you and the rest will have a good karma to meet him in Malaysia soon ;) Treasure the moment ^^ Thank you for reading and putting your comment here. Have a great day Carrie!