Early this morning, once I opened the house main door, I could smell a strong burning smell. I had a thought of canceling my cycling session but sinceI had already prepared with the gear and the bike, I decided to continue my mission.

As expected,  I saw less people exercising this morning (especially the groups of people who were usually seen marching and exercising their breath every morning). Hmm.... They seemed so experienced and knew when they shouldn't come out for exercise, unlike me :(
However I still managed to finish one hour cycling and headed back home.

After that I went out to work. Once I came out from MRT, I could smell the burning smell again (even inside the MRT station). As I walked up to my office, the smell followed me all the way up to my office door. (Our office is located at Basement near loading bay where there was no barrier towards outside air). For the whole afternoon we could smell it. Poor receiving auntie and the two porters who had to work near loading bay :(
In Facebook I could see many of my friends taking photos of hazy Singapore from many different areas. North, central, east and west. All showed almost the same situation.

Below is the PSI reading measured by NEA (National Environment Agency).

And below was taken at 4pm from the area of where I stay. 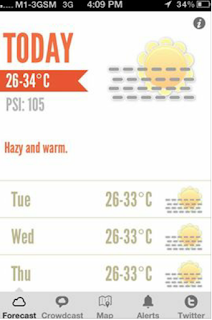 We always have this problems almost every year. It was due to forest burning in Sumatra island of Indonesia. But usually the rate was not as high as today. It would go around 70-90. So today's haze is considered as exceptionally high and it can harm our body if continues like this.

So people is advised to stay indoor especially children and those who have breathing problems.  Hopefully the haze can end soon. And if tomorrow it's still like this, I won't go for my cycling as I have to love my lung more hehehe...

Right now it is still hazy outside. However the sky above still shows a beautiful color as sunset is coming.....

Share with you Singapore's city view this morning 18 June 2013 courtesy of Mr. Yap 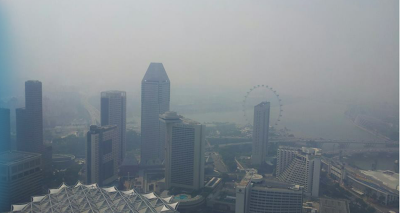 Below is the message brought to you by Singapore General Hospital. 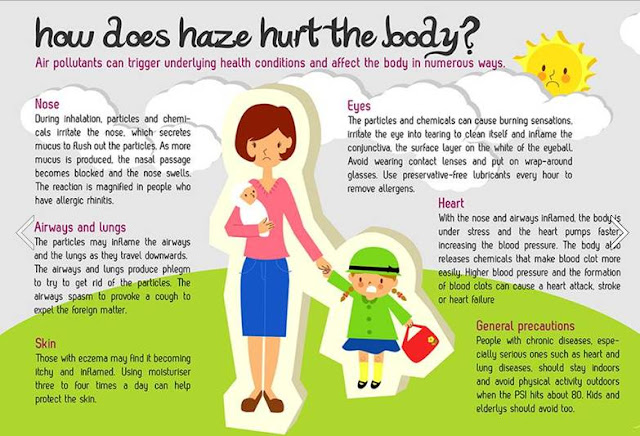