Love notes from my dear son :)

This morning when I packed my bag to work, guess what I found? My son's student's card and small little love notes from him :) 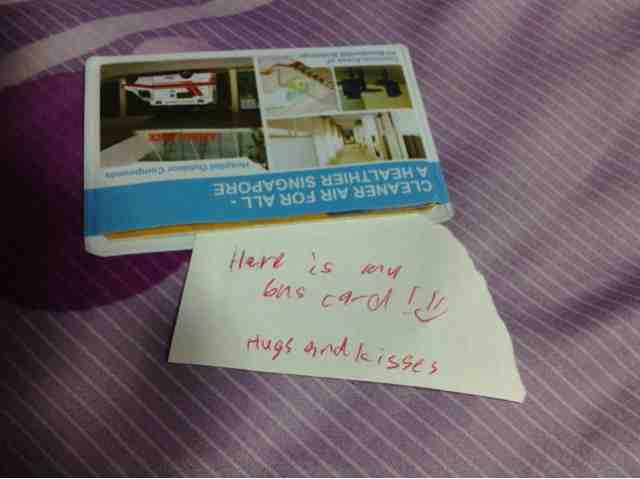 Every night after work, after having dinner and taking a bath, I would put myself into my room reading my book or playing with Ipad and turn on the air-con. Air-con would attract my son into my room, and of course, me. Hahaha....

When he saw me busy watching video in Ipad, he would go out and in the room for many times to attract my attention, until he really couldn't stand, he would stay on the bed and sit next to me. He then started to 'disturb' me :D

He shouted he was bored for many many times and started to talk about anything until I had no choice but to stop the movie I watched or to put down the book I read.

He told me what he did in the afternoon after school, what he ate (again, his favorite McSpicy from McDonald), how not nice the new McDonald's Peri Peri Burger, his height and weight (he is obviously over weight now - height 1,40m and weight 54.40kg - he even argued with me when I said he is 55 kg, he said, no, not yet, now only 54.40 kg ^^"), how proud he is that his last time's good friend is even still fatter than him, that he almost forgot about his CCA yesterday afternoon and only remembered after boarding inside the school bus - so he told driver to drop him and he walked back to school, and many more stories coming out from his mouth.

Hahaha.... I feel very blessed and grateful that my son would like to share his activities and life story with me :) Occasionally I kissed his two chubby cheeks and lip and he kissed me back same way. Sometimes we would hug and I could feel how fluffy his body is, could make it as my pillow when I sleep :) Thank you Baobei, for making me the happiest mother on earth :)

He can't borrow library book lately because he lost one of the books that he borrowed last month and we haven't paid the book yet to the library. And he has one book that was overdue too. He passed the book to me yesterday but I didn't go to library yesterday as I thought of returning it this Saturday.

So yesterday he was asking me again if I have returned his book. He mentioned that he went to library yesterday with his grandma, but he wasn't allowed to borrow any book due to haven't paid the lost book yet. I told him to pass me his student card so I can settle it tonight. That's how his student's card landed at my room this morning :)

What made me happy was his love notes. We have built this little habit (writing love notes) since he was very little. Sometimes I worked and came back home very late. Before he slept, he would write some 'Good night' love notes to me. And sometimes I would reply him back and put the notes on his table so that he could find my notes in the morning when he woke up (he has to wake up at 5.30am every morning to catch the school bus).

Lucky are you that you are blessed with a lovely son. I hope he would make you all happy and proud mom.

Thank you very much for your wish Riku :)

He is talkative.. like his father... the good thing is that he share his story.. nowadays, kids often ignore their parent.. even the parent ask what r u doing today, they even pretend not hear what u said...
Good job Reever...

Haha.. That's why I said I was very blessed and grateful that he loves to share his story with me :) Thank you yz for your comment :) Have a wonderful weekend with your both sons hehehe....